The SOS project focused on the safety of non-steroidal anti-inflammatory drugs with a specific focus on the evaluation of the gastro-intestinal and cardiovascular effects of traditional NSAIDs and COX-II selective NSAIDs (coxibs). The project used various resources for the assessment of the gastrointestinal (GI) and cardiovascular (CV) effects of tNSAIDs and coxibs. The meta-analyses were published and showed that clinical trials were mostly not large enough to demonstrate NSAID GI and CV safety, especially not prior to the COXIB era, and not at all in children. The meta-analyses from observational studies yielded estimates for GI, acute myocardial infarction and stroke but none for heart failure. Information on dose and duration effects was missing and several methodological gaps were identified, as well as a lack of data in children.

The SOS healthcare database study allowed for the study of the association between 13 individual and all study outcomes through a nested case control study in a cohort of 8.5 million new NSAID users, while addressing many of the gaps that had been identified in literature. All SOS data were communicated to the European Medicines Agency to allow for regulatory decision making. A decision model for choosing the ‘least’ GI/CV toxic NSAID was developed for clinicians, based on the empiric evidence in the consortium and data from the literature.

SOS was the first project that addressed an EMA defined drug safety issues and has broken grounds and has set the stage because of its scale, the type of distributed collaboration across databases and sites and the feedback and communication with the European Medicines Agency. The SOS project was a consortium funded by the European Commission Seventh Framework programme and included institutions from Netherlands, Spain, Italy, Germany, France, the USA and Canda. The consortium was coordinated by Erasmus University Medical Center in the Netherlands. 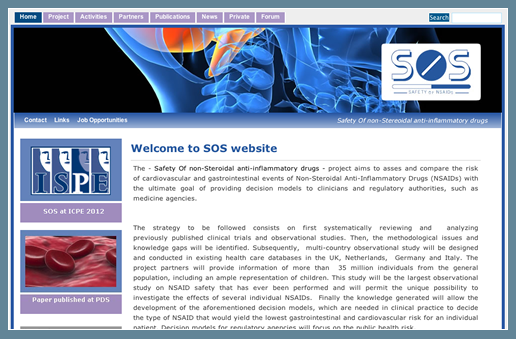